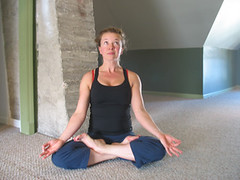 Lets look at the idea of yoga for health. Please check with your doctor before any exercise routine, especially if you are currently pregnant.

Some people believe that eating healthy is the right way to go while others believe you need a strong exercise routine. A good diet consists of a lot of whole foods while regular exercise means around 30 minutes of physical activity for at least 5 days a week.

While one of these tried and tested regimens may seem to be the way to go when you talk of anti-aging routines today, yoga is bound to be mentioned at some point as well. You may or may not know this but there actually is more than one type of yoga. Some types are smooth and relaxing while others are more vigorous and challenging. It is considered the best anti-aging routine which is guaranteed to make you feel younger.

But how do you determine which type is the best for you? Let’s take a look at each of them and try figuring it out:

Most people who talk about yoga are usually talking about this particular type. It is the best choice for anyone who is just starting out. It is gentler and slower that all of the other types. But, it does encompass a number of different classic yoga asanas (postures) which makes it great for people with any physical condition. If you aren’t a fitness buff, this is the perfect place for you to start.

This is a general term which is used to describe a number of different yoga’s. It basically refers to movements which are synchronized with your breathing. It’s more vigorous as compared to Hatha and the asanas are all based around a sequence of poses known as the sun salutations. All Vinyasa classes begin with sun salutations as a warm up and it is only towards the end of the class that the most intense stretches are performed. This is a great choice for anyone who is looking to increase the difficulty level slightly.

This type is focused mainly on the alignment of the body and relies on the use of props like straps, yoga blankets and blocks in order to help you align your body properly. It has all been based on the teachings of B.K.S. Iyengar and focuses on alignment so as to avoid stress or injury to the body. It is a great choice for anyone who is looking to improve their posture or to increase the ease with which their body moves.

This form of yoga is fast-paced and much more intense. There is a fixed set of movements which need to be performed in the same order each time. You are supposed to move through these movements as quickly as you possibly can. It is this rapid movement which makes this yoga workout so intense. If you have ever heard someone talking about “Power yoga,” then you will probably know what Ashtanga is all about. Power yoga is derived from the rapid movements of Ashtanga although the poses aren’t exactly the same.

This yoga type is also called “Hot yoga.” It was developed by Bikram Choudhary and involves practicing yoga in a warm room. The theory behind this is that it helps loosen tight muscles. It also causes a lot of sweating which is considered to be a type of cleansing for your body. Traditionally, it involves a preset series of twenty-six poses but every yoga teacher does not adhere to this strictly.

This yoga focuses on breathing and physical movement at the same time. It incorporates a number of different poses and movements. It is believed to increase clarity in thinking, release primal energy and activate your spiritual chakras.

Yoga For Health News On The Net:

The Ultimate Guide to Yoga Lingo. Health.com. New to yoga? It can take a few sessions before you fully get the hang of the different poses not to mention class etiquette. But if you don’t have a clue what the difference is between downward-facing dog and shavasana then you might spend a good.…continued……

You should try each of these types of yoga before determining which one is the best for you. Remember, yoga is just as good for your body and mind as it is for anti-aging. So taking out the time to find the most suitable type is certainly going to pay off in the long run. Let me correct myself, it won’t just make you feel younger, it will make you look younger too.

So, this is just one of many ideas about things which can help us to stay young and healthy as long as possible.